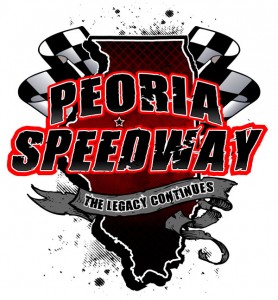 (Peoria, IL) An absolutely perfect Central Illinois evening greeted the fans at Peoria Speedway on Wednesday night for “NASCAR Night”, and they were not disappointed as 3 NASCAR stars ended up 1-2-3 over some of the toughest UMP Modifieds in the Midwest.

The marquee event became a chess match between 2 NASCAR veterans on a wicked fast race track , with Kenny Schrader and Kenny Wallace engaging in a line-swapping 25 lap battle to the end. Schrader prevailed with a lap 18 pass of Wallace, who won the previous night in Lincoln.

Pole sitter Billy Tuckwell jumped to the lead on the bottom after driving side-by-side with a rim-riding Derrick Doerr. Tuckwell made the pass stick under the judges stand on lap 1, and Doerr immediately was under attack by Wallace. Doerr stayed committed to the top side of the track, but Wallace scooted by on the bottom on lap 3. A Joe Wagner spin slowed the action on lap 3, and it took 3 attempts to get the race re-started.

When the race finally went green again, Tuckwell changed lines, blasting the cushion after spending the first 3 laps down low. Wallace took advantage, wrestling the lead from Tuckwell as the duo passed the judges stand on lap 5. Wallace moved back to the high side, and Tuckwell followed until a lap 10 caution.

Schrader was running 3rd after the re-start, and ran the cushion past a bottom-hugging Tuckwell on lap 12 and set sail for Wallace. A lap 14 re-start set the stage for the winning pass with Wallace moving back to the bottom and Schrader on the berm. The 2 veterans ran in a dead heat until Schrader finally rocketed off the top of turn 4 and passed Wallace down the front stretch on lap 18.

“I was trying to get Kenny to go to the bottom and he finally did, so I jumped to the top and got by him”, Schrader told the crowd in victory lane. “That was a lot of fun out there! I mean, that is what you want right there-a 2 groove race track. That was a heckuva race, and I only managed to (tick) one person off”, Schrader joked.

In the Limited Late Model feature, Brian Crebo jumped to the lead, but was pressured by Matt Murphy, who took the point riding the berm on lap 2. Tommy Duncan passed Crebo, and ran down Murphy by lap 10. On lap 11, Duncan drove by Murphy coming out of turn 4 only to have a caution wipe out the pass.

Duncan went right after Murphy on the re-start, but got the 2 made contact on the front stretch and Duncan spun out. Joey Markle passed Crebo for 2nd on the front stretch on lap 12, but could not catch Murphy, who won his first race of the year at Peoria. Markle was 2nd, with Crebo, Evan Fink, and Bob Gardner completing the top 5.

“It was a little rough up on the top of the track, but it was really fast up there”, Murphy said. “The track was excellent with 2 grooves, and I think we finally got some things figured out on this car.”

The UMP Hornet feature saw Jeremy Kingsley stalk Jonathon Schuck until they ran dead even beginning on lap 8. The duo ran side-by-side until Kingsley finally nudged ahead going down the back stretch on the final lap. Schuck, Zach Bollinger, Tyler Benson and Matt Machey followed Kingsley across the stripe.

“That was a great race there”, Kingsley told the crowd. “He (Schuck) is a great racer and that was a lot of fun. The track was excellent and I can’t wait to see the Mods out here.”