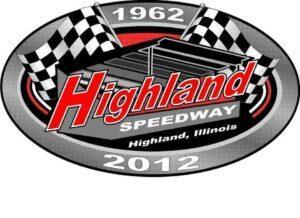 HIGHLAND IL ( July 14, 2012) – It was Christmas in July with Santa and gifts for the kids, the PCRA bringing the touring Crate Late Models to battle towards National points and all the weekly divisions, as racing returns to the Highland Speedway after a two week layoff due to extreme heat.

The competition in all the Divisions at the Highland Speedway is intense, every week one of any number of drivers is fighting for the victory. This week in the Becker Jewelers Late Models the battle started at the drop of the green flag and didn’t end till the checkers flew. Two of the toughest drivers in the area sat on the front row, the 78 of current point’s leader Chad Zobrist and the 6K of Michael Kloos. Behind them sat the 25 of veteran driver “Fast” Frankie Martin and the 11K of Shannon Kuhn who has recently stepped up to the plate with some pretty good runs.

Kloos jumped out to the lead running the high groove of the Speedway he was followed by Martin, Zobrist, and Kuhn was working the bottom. Cautions plagued the first 9 laps of the event, but Kloos maintained the lead, with Zobrist, Martin and Kuhn in tow. By lap 10 Zobrist managed to have a fender on Kloos as they passed the stripe. Staying committed to their respective lines around the race track the leaders encountered lap traffic by lap 19.

On lap 20 the caution came out for a spin by the 71 of Louie Baker JR this grouped the field together onto single file for the restart. This definitely hurt the 6K as he was working the high side and building momentum and keeping pace with Zobrist who was on the bottom.
The lineup on the restart was Zobrist, Kloos, Martin, Kuhn and the 78 of Jason Zobrist.

With only 5 laps to go, Zobrist jumped at the drop of the green while Kloos worked feverishly to rebuild the momentum he had going before the caution. As the laps wound down his (Kloos) efforts cost him as Martin went to the middle to capture second. No one was going to touch the 78 of Zobrist as he sprinted away for yet another trip to the Casey’s General Stores Victory Lane. Martin was second, Kloos settled for third after battling for the lead for 20 laps of the 25 lap main event. Kuhn was fourth and Jason Zobrist completed the top five.

Miller Lite PCRA Pro Late Models
Long time Super Late Model driver Mark Voigt formed the Pro Crate Racers Association (PCRA) last year to help develop a touring series for the division powered by the GM 602 and 604 Crate engines. This was their first visit to the Highland Speedway and by the number of entries his hard work is paying off in its second year of operation.

While the car rules of the PCRA are similar of the UMP’s Pro Late Model Division, one difference the fans can see is the use of the “Delaware” style restart. After a caution the leader is placed on point and the balance of the field is aligned side by side behind him. The second place driver does have the option of choosing the high side or low side. This makes for some very interesting restarts.

Like NASCAR’S Nationwide Series were occasionally a Sprint Cup driver will participate in any given event, the same is true for the PCRA. Tonight, Super Late Model Drivers Michael Kloos and Rick Salter were amongst the entrants in the 25 lap main event.

Bobby Dauderman proved tonight why he is a past UMP Pro Late Model Champion and now the point’s leader in the PCRA with just a 10 margin over Mark Oller. While Kloos led the first lap of the 25 lap nightcap, Dauderman grabbed the lead on lap 2 and held on for the first PCRA Victory at the Highland Speedway. Following Dauderman to the Casey’s General Stores Victory Lane was Salter, Kloos, John Cory, and Clay Bauman who started ninth.

Justin Ketrow is having a stellar year behind the wheel of the number 6 and sat on the pole for the start of the 20 lap main event, along side of him was multi track champion Brian Bielong driving his number 70, in the second row was Paul Bailey in the 81, Bailey who had been turning laps the last few seasons in a Late Model, has struggled early on this season upon returning to the driver’s seat of a Modified, but of late he appears to gaining ground with some excellent results, beside him defending UMP National Champion Mike Harrison.

Bielong jumped to the lead on the first lap. A caution on lap three reset the field with Bielong the leader, Ketrow, Harrison, Bailey and Aaron Kleine in his number 13 running fifth. On the first attempt of the restart the 99K was involved in a spin and the field made attempt number two. This time Ketrow spun in turn two while running second. Once the race got rolling it was a see saw battle between Bielong and Harrison then on lap 8 Harrison very uncharacteristically spun by himself in turn two bringing out the yellow once again ( it was later posted he had issues with a brake caliper hanging up).

The restart put Bielong on point, moved Bailey, who was hanging tuff with the leaders to second, Klein to third, Chris Smith in the 15 to fourth and Tyler Diebert in the 84 to fifth.

The lead constantly changed between Bielong and Bailey. On lap 16 a spin by Jacob Steinkoenig in the 24J reset the field once again. This time Bailey was on point with Bielong, Smith, Diebert, and Klein in tow. Belong kept applying the pressure on Bailey and finally coming out of turn 4 on the white flag lap he managed enough momentum to lead the final lap and return the number 70 to the Casey’s’ General Stores Victory Lane. After a valiant effort Bailey he had to settle for second, Smith, Diebert, and Kleine all followed respectively.

Jimmy Mars Streaks to Runner-Up at Plymouth; Trio of WOOLMS Shows Ahead

Earl Pearson Jr. Wins in a Photo Finish at Florence

Jimmy Mars Streaks to Runner-Up at Plymouth; Trio of WOOLMS Shows Ahead