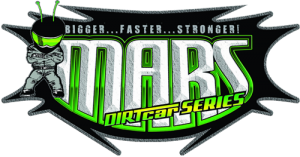 Monett, MO (September 2, 2012) – Jesse Stovall of Republic, MO picked up a big one Sunday at Monett Speedway. Stovall entered his name in the record books as he won the 42nd Annual 4-State Dirt Track Championship and the $4,000 top prize. Stovall, the MARS point leader, started on the pole and led every lap of the 35 lap feature. A record crowd was in attendance to watch the historic race, including 40 late models and one of the biggest car counts in recent memory, 153 cars.
Stovall withstood several challenges from 6-time MARS Champion Terry Phillips of Springfield, MO and Dirt Late Model Hall of Famer Billy Moyer of Batesville, AR as he worked through lap traffic masterfully enroute to his sixth feature win with the MARS series this year.

Phillips suffered a flat on lap 26 and rebounded to finish tenth. Jack Sullivan of Greenbrier, AR won his heat race and was scheduled to start next to Stovall on the front row, until a blown engine would end his night before the feature started.

Next up for the MARS series will be the Larry Phillips Memorial at Springfield Raceway in Springfield, MO on Saturday September 15, 2012.