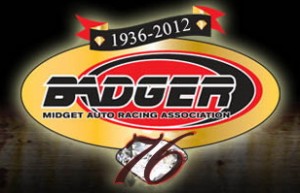 g and car owner Hans Lein headlined the list of honorees at the annual Badger Midget Auto Racing Association awards banquet Saturday Night at the Angell Park Pavilion . The event brought the curtain down on the 76th anniversary season for the series sponsored by Mid-State Equipment and the Stark Automotive Group.

On the strength of seven feature wins, Chad Bogar easily outdistanced Scott Crawford and Jason Tetrault to win the his second straight Badger 600 Micro Series Championship. The 2013 season schedule for both series will be released in early December.