NAPA Super DIRT Week XLII At The New York State Fairgrounds Lived Up To Its Billing As ‘Racing’s Biggest Party!’ In 2013 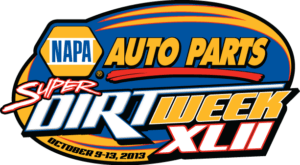 SYRACUSE, NY – Oct. 24, 2013 – After taking some time to reflect on NAPA Super DIRT Week XLII at the New York State Fairgrounds, DIRTcar Northeast Director of Sales of Marketing Jeff Hachmann came to one conclusion about the fall spectacular of speed known as ‘Racing’s Biggest Party!’

“It was one of the best NAPA Super DIRT Weeks ever,” pronounced Hachmann. “From the downright wonderful weather to the energized atmosphere around the Fairgrounds to the dramatic race finishes, it was an event to remember. Anyone who wasn’t able to attend this year had better make plans to be there in 2014 because the momentum behind NAPA Super DIRT Week seems to be at an alltime high.”

With rising star Billy Dunn’s memorable $50,000 victory in the Super DIRTcar Series Big-Block Modified Syracuse 200 still fresh in everyone’s minds, plans are already in motion for the 43rd annual NAPA Super DIRT Week at the Syracuse Mile on Oct. 8-12, 2014. Hachmann said ticket renewals are in the process of being sent out to fans and open sales of seats in the massive covered grandstand will begin after the first of the year.

“The electricity and excitement of NAPA Super Week was unmistakable to everyone on hand this year,” said Hachmann. “There were so many positives about a week that truly lived up to its stature as the biggest DIRTcar Racing event in the country.”

Some of the NAPA Super DIRT Week highlights included:

* Unforgettable finishes. After Saturday’s ‘Salute to the Troops’ 358-Modified Championship 150 fell into Brett Hearn’s lap when Dunn suffered the heartbreaking fate of running out of fuel while leading on the final circuit, the Moody Mile’s racing gods turned around and blessed the 29-year-old Dunn in fairy-tale fashion 24 hours later. Dunn pulled off an epic rally from a late-race pit stop to win Sunday’s Syracuse 200 for the first time, dramatically vaulting into the lead in the final laps when the drivers ahead of him succumbed to flat tires or empty fuel tanks.

* New format rules for the Syracuse 200. Nothing shook up Big-Block Modified racing’s most prestigious event like the 200’s rule changes, which eliminated the customary mandatory pit stop for teams and decried that caution-flag laps would not count after lap 175. The new wrinkle created the wildest ending in the history of the Syracuse 200, with Dunn charging forward after pitting late and drivers who gambled on stretching their fuel mileage falling by the wayside.

* Record influx of campers. As soon as a seemingly endless line of RVs caravanned into the Fairgrounds on Wednesday morning, it was apparent that NAPA Super DIRT Week XLII had attracted an unprecedented number of campers. The pumped-up camper population contributed to the Fairgrounds’ festive atmosphere, which included mobs of dancing post-race revelers on the infield road on Friday and Saturday and racing friends swapping stories around sweet-smelling campfires.

* Local media coverage. Following the wildly successful NAPA Super DIRT Week Media Challenge kart race on Sept. 24 at nearby Destiny USA’s Pole Position Raceway two weeks, it was clear that this year’s DIRTcar Racing blockbuster at the Syracuse Mile would be covered better than ever before by the Syracuse media. Indeed, from start-to-finish, NAPA Super DIRT Week received a huge amount of media attention as the city’s television stations and daily newspaper embraced it as the major-league event it is.

“Thanks to the fans, race teams, sponsors and media – as well as the hard-working army of DIRTcar employees – NAPA Super DIRT Week 2013 was a rousing success,” declared Hachmann. “All of us with the World Racing Group and DIRTcar Northeast are looking forward to an even bigger and better NAPA Super DIRT Week on Oct. 8-12, 2014.”