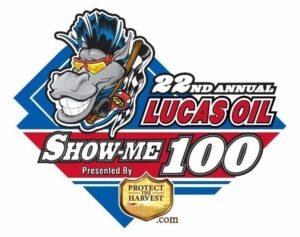 WHEATLAND, MO (March 12th, 2014)- Officials with Lucas Oil Speedway are pleased to announce the expansion of the Crawford Supply Race of Champions Presented by Traeger Grills for 2014. This year the highly anticipated $1,000 to win Friday night preliminary event as part of the 22nd Annual Lucas Oil Show-Me 100 Presented by ProtectTheHarvest.com will not only include all past Lucas Oil Show-Me 100 Winners, but will now also include all former Lucas Oil Late Model Dirt Series and Lucas Oil MLRA Series Champions.

“We just felt this was a great way to truly have a Race of Champions” stated Lucas Oil Speedway General Manager Dan Robinson. “This opens it up to some of the best in the business including Shannon Babb, Earl Pearson Jr., John Anderson, and Tony Jackson Jr., among others.” The star studded field already includes past Show-Me 100 winners Billy Moyer, Scott Bloomquist, Jimmy Owens, Brian Birkhofer, Wendell Wallace, and Terry Phillips just to name a few.

The 22nd Annual Lucas Oil Show-Me 100 gets under way on Thursday, May 22nd with a $5,000 to win MLRA event plus a complete Pitts Homes USRA Modified Show featuring NASCAR Star and TV personality Kenny Wallace.

Action on Friday, May 23rd will get underway with Lucas Oil Late Model Dirt Series Qualifying followed by six 20-lap heat races as the top-3 in each heat race automatically transfer to the $30,000 to win Lucas Oil Show-Me 100 on Saturday night. Friday night racing action also includes the aforementioned Crawford Supply Race of Champions Presented by Traeger Grills and the Hot Rod Tracker Manufacturers Dash featuring the fastest qualifiers in each chassis brand running for a $1,000 to win top prize. The Pitts Homes USRA Modifieds will be running preliminary events as they attempt to qualify for their main event on Saturday night.

On Saturday night May 24th, Lucas Oil Late Model Dirt Series competitors not already locked into the 100-lap main event will attempt to work their way in through B-Mains and the Midwest Sheet Metal Show-Me Challenge. The $30,000 to win, 100-lap finale is set to follow as Jimmy Owens looks to continue his stranglehold on the Lucas Oil Speedway. The USRA Modifieds round out the weekend action with a special $1,000 to win Main Event Presented by RacinDirt.com.
A limited number of 2-day Reserved Seat Tickets remain and can only be purchased by calling the track office at (417) 282-5984. Advanced General Admission tickets for all 3-days of action are available at www.LucasOilSpeedway.com as well as the complete weekend schedule, pricing, and ticket information.

Click the link below for the tentative 2014 Lucas Oil Speedway schedule. All events, dates, classes, and payouts are tentative and subject to change.

About Lucas Oil Speedway
Lucas Oil Speedway is considered by fans, drivers and industry insiders to be one of the top five Race Tracks in the Nation. Located in Wheatland, Missouri, approximately an hour from Springfield, Missouri and just a quick hour and a half from the Kansas City Metro Area, dubbed the “Diamond of Dirt Tracks” Lucas Oil Speedway certainly lives up to the title.