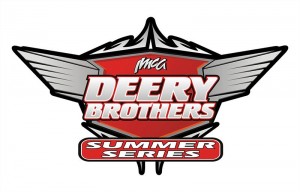 Jeff Aikey led start to finish in the Miller Lite 50 event, earning a $3,000 share of the purse plus a pair of $500 bonuses along with his 62nd career Deery win.

One of seven drivers from the track’s 1985-1990 Late Model era competing Tuesday night, the seven-time series champion pocketed those bonuses from H & F Distributing for winning the fea­ture and from former promoter Steve Priske, now owner of Rumor’s Bar & Grill, as the highest finishing veteran in the main event.

Aikey started third and ran with Guss close behind most of the way. In a fast field, the frontrun­ners had lapped only two cars before midway.

Denny Eckrich made a charge and challenged Guss for second. The two made contact, with Eckrich spinning to the infield and bringing out the first caution of the night on lap 43.

The yellow waved again for a lap 45 incident. Aikey ran the topside to the checkers, beating Andy Eckrich across the stripe by a couple car lengths to become the sixth different winner in as many series events this season.

Four of Aikey’s Deery wins have now come at Marshalltown, the first of them in 1987, the series’ first year.

Touring IMCA Late Models are next at Independence Motor Speedway on Tuesday, July 1 for another $3,000 to win, minimum $300 to start Deery Series event.