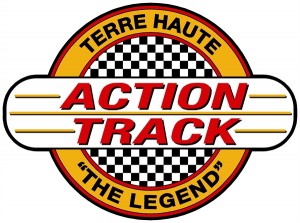 Officials from Track Enterprises, the promotion company for the Terre Haute Action Track, has announced the 2016-season schedule for the 1/2-mile racetrack.  The speedway holds several special events during the summer that feature divisions from the United States Auto Club and United Midwestern Promoters.

The campaign will begin on Sunday, April 3 for an exciting season opener that will feature the USAC Silver Crown cars.  Not only will this be the season opener for the track, it will be the first look at the champ cars for the new year.  Benton, IL driver, Shane Cockrum, held off a late race challenge from C.J. Leary to take his second career Silver Crown victory in last year’s race, which was held in July.  This year’s opener will also feature the UMP Modifieds.

The second event on this year’s schedule is set for Sunday, May 1.  On the card will be the MSCS Sprint cars and UMP Modifieds.  Last season, 23 drivers took the green with Brady Short taking the victory over Jerry Coons, Jr. and Carson Short.  Former NASCAR racer and current TV personality Kenny Wallace took the win in the Modifieds.

Back on the schedule for 2016 is the Tony Hulman Classic, set for Wednesday, May 25.  The event, held the week of the Indy 500 and the night before the Hoosier 100, features the USAC National Sprint Cars and UMP Modifieds.  Last season, the race was postponed due to bad weather and was run in September as part of the Hurtubise Classic.

The fourth event this year will feature a special event for the Summit National UMP Modifieds as part of their Summernationals and the Indiana Late Model Series on Sunday, June 19.  Last season, officials attempted a UMP sanctioned Pro Late Model event but due to lack of area cars, the count was small for the race.  This season, the Late Model race will be an Indiana Late Model Series scheduled event, which should bring a solid field of cars.  The class is based at Brownstown Speedway.

Historically, the biggest event of the year is the Don Smith Classic, held during USAC Indiana Sprint week.  This year, the event is set for Wednesday, July 13, which is also part of fair week in Vigo County.  Last season, the stands were jam packed for one of the best turnouts in recent memory.  19-year old Aaron Farney, from Brookston, Indiana claimed his first career victory against a near 40-car field.

Rounding out this year’s slate of events is the Jim Hurtubise Classic for the USAC Sprint Cars on Friday, September 16.  Last year, another great turnout of fans saw an exciting show that had Robert Ballou claiming the lead with three laps to go.  Chris Windom and Dave Darland followed him across the line.  The UMP Modifieds will join the Sprints for the season finale.

In addition to the slate of races, a preseason test and tune has been added to the schedule for Saturday, March 26.  The event will run from 12:00-4:00 and will be open to any division competitor wanting to get some shakedown laps.