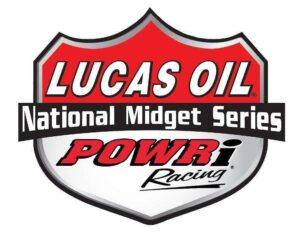 Belleville, IL – The POWRi Lucas Oil National Midget Series and POWRi Lucas Oil West Midget Series will head to the Federated Auto Parts Raceway at I-55 in Pevely, Missouri on Friday, August 5th for the Prelude to the Ironman and Saturday, August 6th for the Ironman 55. Running in conjunction with the World of Outlaws Craftsman Sprint Cars, this will be POWRi’s first appearance at the high-banked 1/3rd mile in 2016, after the earlier scheduled show was cancelled due to rain. In 2015 fans saw Tanner Thorson take the checkers for the Prelude to the Ironman, while Thomas Messeraul cleaned house in the Ironman 55 finale.

In POWRi Lucas Oil West Midget Series competition, Grady Chandler has a slim 10 point lead over Steven Shebester. Blake Edwards is in third, 520 points out of the top spot, while Jason McDougal is in fourth, 80 points behind Edwards. Kade Morton holds fifth.
All midget teams and their families’ member or non-member will pay a reduced pit pass price of $30.00. Please let them know at the pit pass booth that you are with a POWRi midget team.