Pierce passed Jesse Stovall – who clinched his first MLRA championship – on lap 49 of the 50-lap feature and denied Stovall of a weekend Fall Nationals sweep. A night earlier, Stovall beat Pierce to the finish line. 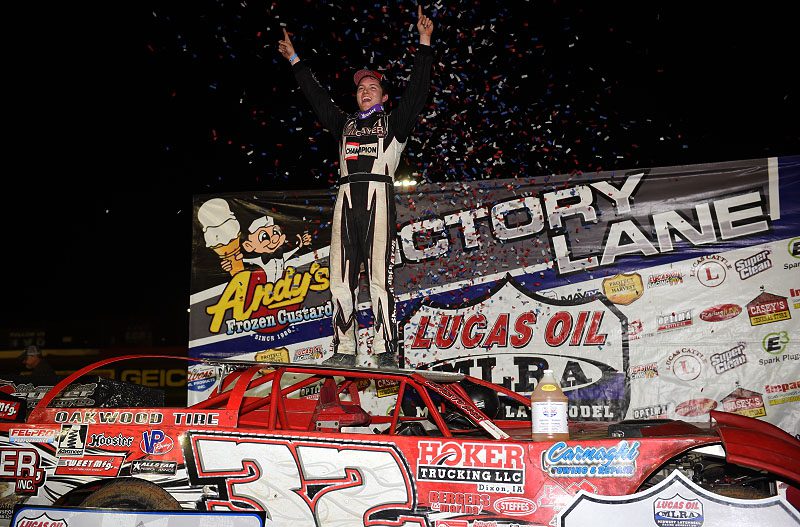 Bobby Pierce after his 23rd victory of the season. (Lloyd Collins photo)

“Congrats to Jesse on winning last night and second tonight. I’m just glad we were one spot better tonight,” the 19-year-old Pierce said after his 23rd feature victory of the season – including the World 100 and North-South 100.

“It’s been a crazy year so far. We have a couple of races left and hopefully we can get some more wins,” added Pierce, of Oakwood, Ill. He earned $5,000 for his first main event win at Lucas Oil Speedway.

In the co-headliner, Timothy Brown of Stoutland captured the $5,000 prize in the 50-lap Big Buck 50 Street Stock Special Presented by Whitetail Trophy Hunt. He also earned a free entry into the Whitetail Hunt later this fall, which has a $15,000 first prize.

A total of 155 cars checked into the pits – 92 Street Stocks and 63 Late Models – as the oval-track racing season at Lucas Oil Speedway came to a close.

Pierce brought the big crowd to its feet when he passed Stovall coming out of turn two on the next-to-final circuit in the season’s final MLRA race. Stovall slipped high, into the cushion, and lost momentum as he encountered slower traffic.

“We were riding pretty good and those lapped cars … at the end of the day it was a good race,” Stovall said. “Bobby is one of the best in the business. He’s a good little driver. He has that golden horseshoe right now.

“Just two laps short. You hate to lose them like that. But I’ve won some like that. That’s part of the game.”

Stovall’s disappointment at finishing second was softened by his MLRA championship. He entered the night with an all-but-insurmountable 74-point lead over reigning champ Terry Phillips after capturing Friday’s Fall Nationals feature win.

“That was the ultimate goal,” said Stovall, who finished just behind Phillips for the series crown a year ago.

Manville bolted from his pole starting position and opened a big lead in the early going, a straightaway margin in front of Brantlee Gotschall and Stovall.

But Stovall began to gradually reel in the leader and, with Manville caught up by slower traffic, drove into the lead with an outside pass going into turn three on lap 21.

Meanwhile, Chris Simpson drove from his 15th starting spot to crack the top five when the race’s third caution flew on lap 22. A five-car accident in turn one brought out the fifth caution on lap 31, wiping away a 10 car-length lead that Stovall had built over Manville with Simpson in third.

Pierce moved into the top five and set his sights on the leaders. But Stovall still appeared to be in command until the final five laps when lapped cars dented his momentum and allowed Pierce to close in.

Simpson, of Oxford, Iowa, wound up third with Manville fourth and Garret Alberton in fifth. Twelve of the 26 starters finished on the lead lap with Dirt Hall of Famer Billy Moyer first out of the race with lap one mechanical issues. 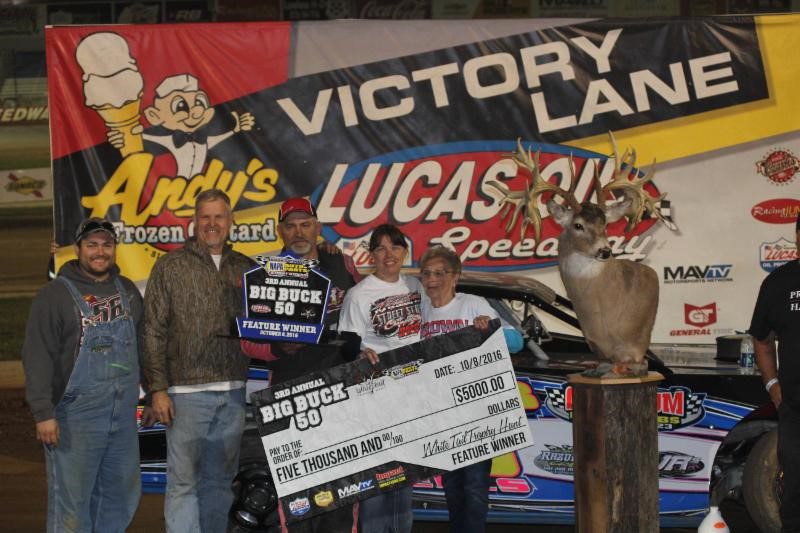 Derek Brown had an apparent flat tire with six laps remaining, ending his bid for a 10th win of the season at Lucas Oil Speedway. Timothy Brown said he hated to see his son eliminated in heartbreaking fashion.

“We both wanted that (Whitetail) hunt,” Timothy Brown said.

Woods started up front after winning the pole dash and led the first seven laps of the feature. Derek Brown went in front on lap eight with Timothy Brown grabbing the lead two laps later.

Those three dueled at the front and were pulling away from the rest of the field until a lap 25 caution bunched things up. Derek Brown took command through a lap 44 caution with Timothy Brown in second and Arnold moving into third.

The race took a major turn on the restart when Derek Brown spun in turn two and went to the pits as the race’s sixth caution waved for an accident in turn four.

“I’d get my tires hot and I’d have to let them cool a little bit,” Timothy Brown said. “Then I could make a run on him. But I hated to see him go out that way, though.”

Woods said it was no surprised to see the Browns up front.

“I’ve been looking at the back of those cars most of the year up here. They’re good guys,” Woods said. “The competition we run against is second to none.”

Defending champion Jeremy Russell of Jonesboro, Ark., was caught up in an accident on lap five and rallied to finish seventh

Up next: The final remaining event of the 2016 season at Lucas Oil Speedway is set for Oct. 22 with the Lucas Oil Monster Truck Nationals “Spooktacular.” Gates open at 5 p.m. with a pit party from 5-6:30 and showtime at 7. For ticket info, log onto LucasOilSpeedway.com.

For complete Lucas Oil Speedway event information, archived stories, ticket info and schedule information for the season, visit lucasoilspeedway.com.
Lucas Oil Speedway is located at Highways 83 and 54 in Wheatland, Missouri. A campground with shower and bathroom facilities is also available. With it’s entrance located just outside the pit gate this sprawling scenic camping facility will continue to enhance the racing experience at the Diamond of Dirt Tracks.
Click www.LucasOilSpeedway.com for more information and detailed directions to the speedway or call the Track Hotline at (417) 282-5984.

(Lincoln, IL) For the fourth night in a row, Lincoln Speedway was back at it for racing action at Logan County Fairgrounds. The July...
Read more

WHEATLAND, Mo. (July 2, 2020) - What was a three-car battle for the lead saw Brad Looney emerge as the lone survivor of the trio...
Read more