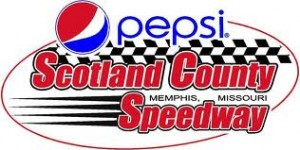 Memphis, MO (Friday, September 29, 2017) – A nice autumn night greeted the 136 cars signed in for competition on night 1 of the Jerry Barrickman Memorial at the Pepsi Scotland County Speedway in Memphis, Missouri. Despite the track sitting idol since mid August, the track produced four and even five wide racing throughout the six feature events. With one driver ending up in victory lane twice in two different divisions.

After twenty qualifying races were completed the features were set to go, with the 14 lap Hobby Stocks taking to the track first. Steve Allen and Aaron Martin drew the front row for the event, with Martin taking advantage of his starting spot to jump out into the lead on lap 1 over Mike Hughes, who started 4th, and Christian Huffman, who started 6th. The lead for Martin only lasted for 1 lap, as Hughes worked under him coming off turn 4 on lap 2 to take over the top spot. One lap later, lap 3, the first caution of the night appeared, as Huffman spun in turn 4 to bring out the yellow. On the restart Hughes moved back out front, with Martin and Nick Ulin, who started 5th, close behind. Just as Hughes started to pull away from the rest of the field, a red flag was waved on lap 7 to slow him down. Heather Baum rolled in turn 3 to bring out the red, she climbed from her car okay. Hughes again grabbed the lead on the restart, with Martin and Ulin battling for second. While the battle was for the runner up spot, Hughes would pull away over the finals laps to pick up the win. Martin won the battle for 2nd, Ulin was 3rd, Tim Dawson started 8th and finished 4th, with Jamie Songer coming home in 5th.

Up next was the twenty-three car Sport Compact feature, with Jake Benischek and Brandon Housley leading the field to the drop of the green flag. Benischek used his front row starting spot to grab the lead on lap 1 over Housley and Brandon Reu. The field was brought to a halt after lap 1 was scored complete, as Cody Cleghorn got into the turn 1 guardrail and rolled to bring out the red. He would climb from his car okay. On the restart Benischek moved back out front, with Reu over taking Housley for the second spot. Reu followed in Benischek’s tire tracks over the next 3 laps, when the second caution of the race appeared on lap 5. This time Jaden DeLonjay spun in turn 4 to bring out the yellow. Once again Benischek jumped out front on the restart, with Reu and Barry Taft, who started 8th, close behind. Another lap scored complete brought out the third and final caution of the race, as William Michel spun in turn 4 from contact from Nick VanHemert to bring out the yellow. Benischek grabbed the lead on the restart, with Reu and Taft looking for away around. Despite a few challenges over the last few laps, Benischek was able to hold on to claim the win. Reu was 2nd, Taft was 3rd, Chuck Fullenkamp came from 9th to finish in 4th, with Housley holding on for 5th.

Kevin Goben and Austen Becerra drew the front row for the 18 lap SportMod feature, with Becerra grabbing the lead on lap 1 over Daniel Fellows and Austin Howes. Just after lap 1 was scored complete the first caution came out, as Curtis Van Der Wal and AJ Johnson spun in turn 3 to bring out the yellow. On the restart Becerra jumped back out front, with Howes and Brandon Lennox, who started 9th, following close behind. Howes, who was working the top of the track, was able to pull along side of Becerra, who was working the bottom, on lap lap 5, but Becerra would hold him off at the line to keep the lead. Then just after the lap was scored complete the second caution of the race slowed the action up front. Bobby Six spun in turn 4 to bring out the yellow. Becerra once again grabbed the lead on the restart, with Lennox over taking Howes for the runner up spot. With that battle going on behind him for second Becerra started to pull away from the field, that was until another caution appeared on lap 9 to slow him down. This time Tim Plummer slowed to a stop in turn 2 with a right front flat to bring out the yellow. On the restart Becerra moved back out front, with Lennox and Logan Anderson, who started 12th, close behind. While Becerra and Lennox worked the top of the track, Anderson worked the bottom to make it a three car battle for the lead. But the action up front was slowed for the fourth time of the event on lap 15, when Brett Lowry spun in turn 1 from contact from Austin Kaplan, as they battled for 9th, to bring out the yellow. Debris down the front stretch on the restart brought the yellow light back on for the final time. The following restart saw Becerra grab the lead over Anderson and Lennox. Becerra then held off Anderson over the final laps to claim his fourth feature win in a row, after scoring wins last weekend in Davenport, Iowa, Burlington, Iowa and Quincy, IL. Anderson was 2nd, Lennox was 3rd, Brayton Carter recovered from a flat tire on lap 1 to come back up to finish in 4th, with Howes rounding out the top 5.

The 20 lap Pro Late Model feature was next to take to the track, with Tommy Elston and Gunner Frank leading the field to the green flag. Elston took advantage of his starting spot to grab the lead on lap 1 over Cayden Carter and Kevin Blackburn. The lead for Elston only lasted for 1 lap, as Carter slid up in front of him coming off turn 4 on lap 2 to take over the top spot. Carter then pulled away in a caution free race to pick up the win. Elston was 2nd, Sam Halstead was 3rd, Blackburn was 4th, with Derek Liles coming home in 5th.

Brandon Jay and Dustin Griffiths drew the front row for the 20 lap Stock Car feature. But just as the green flag was waved the caution light came on, as Jeff Mueller spun in turn 1 to bring out the yellow. On the restart Bob Ahrenson clipped a tire in turn 2 and spun, which collected Jason See and Dallon Murty to bring the yellow light back on. Jay would have to pit for a flat tire under the caution, which moved Abe Huls to the front row for the following restart. Huls would take advantage of that move to jump out into the lead on lap 1 over Griffiths and Nathan Wood, who started 5th. Wood would work under Huls on lap 2 to take over the top spot. While Wood paced the field out front, Johnny Spaw, who started 9th, and Mueller, who spun in turn 1 on the start, were working their way towards the front. Spaw and Mueller looked to get under Wood over the final laps, but Wood was able to hold them off to claim the win. Spaw settled for 2nd, Mueller was 3rd, Huls was 4th, with Griffiths holding on for 5th.

Four-Day Swing Through PA and OH Next for Rocket1 SHINNSTON, W.Va. (08/10/20) – Closing out a grueling 40-day stint, Brandon Sheppard drove the Valvoline No....
Read more

WHAT TO WATCH FOR: ‘The One and Only’ at Knoxville Set To Be Biggest Sprint Car Event Of 2020 The three-day event will see a...
Read more
Previous articleDarrell Lanigan Dominates Rome Showdown
Next articleCarter, Hughes, and Benischek Sweep Jerry Barrickman Memorial at Scotland County Speedway