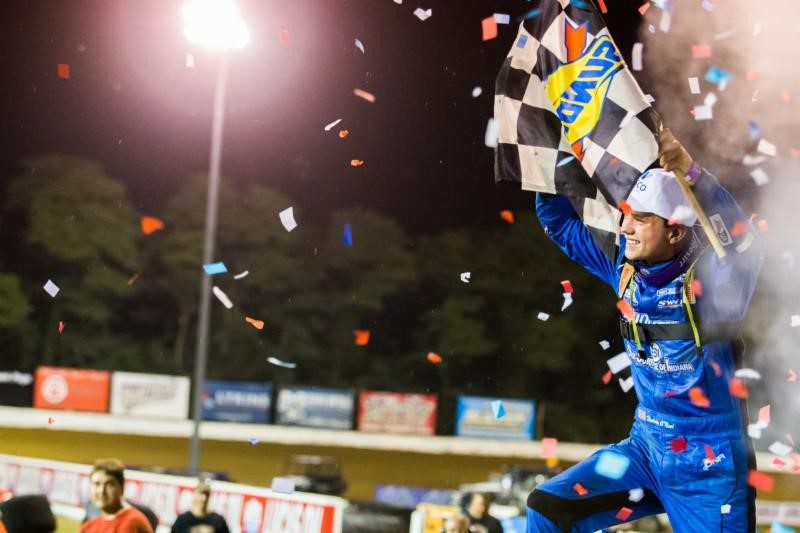 O’Neal took control on lap six from Kyle Bronson and held the point until rain started to fall just a few laps shy of the halfway mark. Competitors were sent to their pits under a weather delay, returning shortly thereafter to complete the shortened race’s final three circuits.

“Man, I kept waiting on the rain and for it to end. I didn’t know we were only going to run three laps when we came back out. It would have been nice for the fans to get all 50 laps in, but we’ll take this win for sure,” said O’Neal.

O’Neal, who is competing in his final weekend of the season, added: “I need to get the shoulder taken care of, so I can come back strong next February. I want to thank Todd and Vickie Burns for giving me this opportunity to drive their car. I hate it for my crew guys and everyone. I feel like I have let them down for the rest of the season. But I will be back stronger and better next year.”

“It was getting a little slick there those last few laps. I felt like I was just hanging on. It was a great relief when I saw the checkered flag,” said O’Neal.

Tyler Erb, who started seventh in the First-Class Septic, Rocket came home in second. “To finish second to Hudson, I’ll take it. I really wanted to get the win. Our car was good all night. When you run up front with these guys that says something. We will come back tomorrow night and give it another try.”

(Lincoln, IL) For the fourth night in a row, Lincoln Speedway was back at it for racing action at Logan County Fairgrounds. The July...
Read more

WHEATLAND, Mo. (July 2, 2020) - What was a three-car battle for the lead saw Brad Looney emerge as the lone survivor of the trio...
Read more