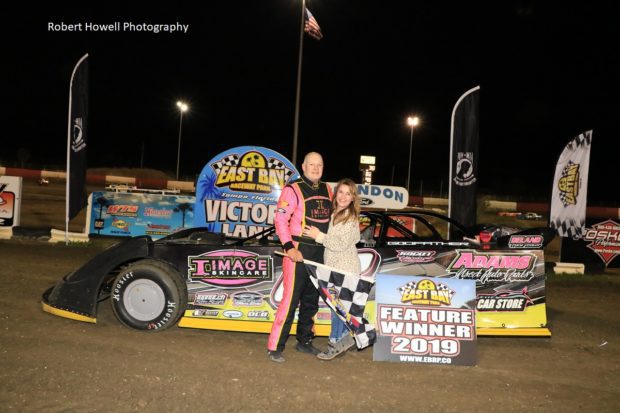 Night #2 of the second week of the 43rd annual Winternationals saw the warmer weather return and the track responded with fastest lap times across all divisions, to the delight of the fans.

Keith Nosbisch set the fast time in Stingray Performance Parts Crate Late Models by posting a 15.483 lap, a full ½ second faster than the previous night’s quick time. In fact, 10 drivers were able to slip below the mark in their qualifying effort.

Once again, the top five finishers in the heat races would get a pass into the night’s 30-lap feature event. Heat events were won by Kenny Monahan, Devin Dixon, Thursday feature winner Steve Mathis Jr. and Nosbisch.

The final four spots went to the top finishers in the B-main, which was won by Thomas Burnside.

Monahan took the early lead with Mathis in tow. Mathis would slip past on lap 5 while Nosbisch moved up to second a lap later. The lead duo encountered lapped traffic two laps later, which forced them to abandon the low line and move to the middle of the track. Once Nosbisch was able to get back to the bottom, he slipped ahead of Mathis on lap 13.

Position battles behind the leader were frequent. Travis Varnadore jumped into the top four and stayed there until making a move to second with four laps to go. In the meantime, Nosbisch had established a clear distance, rolling on to the victory.

The win vindicated the misfortune of the night before as the veteran had to wrestle an ill handling car on Thursday due to a broken power steering belt. The victory marks the return to Winternationals Victory Lane after winning the opening night in 2018. 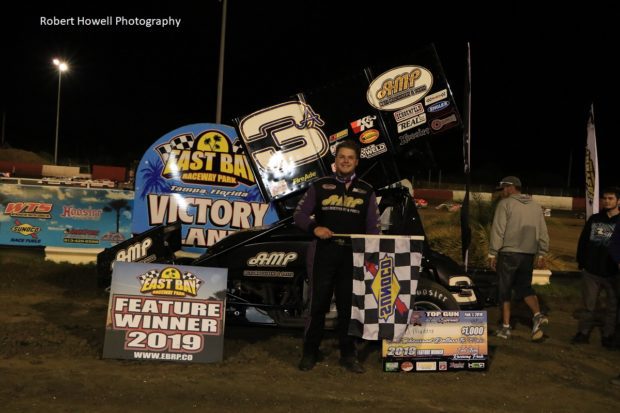 A.J. Maddox was once again the class of the field in the 25-lap Top Gun Sprints feature. Maddox opened the event in the ninth starting spot, right behind a trio of drivers who were racing with additional incentive. Robbie Smith, Brandon Grubaugh and Luke Hill had won their heat races and stood to gain an additional $600, thanks to the Jeff Barfield Clean Sweep Award, given to the racer who wins a heat and the feature. Hill’s heat win was significant because it was his first in a Sprint Car in just his third race night in the division.

Billy Bridges was the one to beat early on, but Bridges and the rest of the field couldn’t get momentum due to several stoppages. The red flag appeared after Johnnie Alexander spun in the middle of the pack, sending cars scattering into each other and the turn four wall. A lengthy clean-up gave some a chance to get back in the race, but attrition was going to be a factor throughout.

Brandon Grubaugh went to the high side in his attempt to move through the pack. The plan worked to a point, but a turn four spin moved him from challenger to the rear of the field. Maddox had moved to second place by lap 5 and Justin Webster was on the move, coming up to fourth before exiting the race as the field was under caution. On the lap 8 restart, Grubaugh appeared out of nowhere, passing nearly a dozen cars in less than three laps. Bridges encountered lapped traffic on lap 10 and that provided the opportunity for Maddox, who took the lead a lap later. Grubaugh was able to climb to second, but could not catch the repeat winner.

John Bradley charged through the field to take the 15-lap V-8 Warrior race. Good efforts by Tommy Hill, Nick Brown, Scott Bane and others made the quest for the lead a bit more challenging, but Bradley came on strong to claim the top spot.

The final night of week 2 rolls out on Groundhog Day, Saturday, Feb. 2. The Stingray Performance Parts Crate Late Models will battle in a 50-lap feature that will see $5,000 going to the winner. Top Gun Sprints and V-8n Warriors round out the week’s racing.

(Lincoln, IL) Lincoln Speedway, located at the Logan County Fairgrounds in Lincoln, IL, is off to a great start for the 2020 racing season....
Read more