Springfield, Mo.- The Springfield Raceway is getting geared-up for the 2nd Annual Saturday Night Lights 100 Lap Late Model Showdown on Friday/Saturday September 20th/21st featuring The Malvern Bank Cash Money Super Dirt Late Model Series. This is the only 100 lap Late Model Feature event in the area for the 2019 season.

The Event was a joint effort between Springfield Owner and Promoter Jerry Hoffman and Cash Money Series leaders Justin Wells and Darrell Mooneyham last year. The event was the 1st ever 100 lap feature at Springfield Raceway as the Track and Series were able to  honor 6 of the area drivers from the past who The Southwest area fans and surrounding areas related with. The result was a packed grandstand, an excellent 2 night show and a 100 Lap Late Model Feature that had the Grandstand on the edge of their seats all night long.

” As years go on we need to keep those racers and heroes out in front of the public, they are drivers that many great stories are told about as they were and are the leaders of Stock Car Racing.” quoted Series director Justin Wells. Our drivers came out in full force last year and put on a 100 lap feature like no other with a near photo finish and racing all over the track.” “The saying is if you can win in this area, you can win just about anywhere else.” We want to honor them especially while they are still with us so can feel that honor and the fact that they have brought pleasure to the fans.”

Springfield promoter and owner Jerry Hoffman believes in keeping the rich history of our area racing and is known to think outside the box in the process of a race program. He prepares perhaps the best track with his high-banked 1/4 dirt oval in The Queen City of Springfield.

” History, Respect and Tradition, that really makes you dig harder and want to give those honored drivers and fans the best that you can. Memories are a great thing and these gentlemen have provided just that, the best to be remember and say Thank You.

This season on Saturday Night September 21st, The 100 lap Late Model Feature will honor Bolivar’s David Goldsberry who probably had more 2nd place finishes to Larry Phillips than any other driver on both Dirt and Asphalt in the number 7. David has pasted on but was perhaps one of the smoothest and popular drivers around, Crane’s Perry “Perk” Vaught who always had sharp looking number 10 cars and a very hard charger, Springfield’s Rex McCroskey who cut his teeth at both the Old Fairgrounds Speedway and The Old Springfield Raceway in the current location a Top Street Stock and Late Model Driver  in the 64 car, Billing’s Rex Merritt who retired at the end of last season. A leader in the changing technology of stock car racing, many track championships in The Modifieds among other awards, and Ferris Collier of Kimberling City. A former IMCA Late Model Champion, NCRA feature winner and front runner in both the 86 car and C88 car. A winner in both Dirt and Asphalt Ferris still does a little racing in the B Mods, but is helping his grandson Cory getting to the front. Ferris was also a leader in helping to get the IMCA Modified class going back when car counts were going down and help find a more affordable way to get drivers back at the tracks.

Former area great Ken Essary has always said it best, The talent here is second to none. These drivers were not only trying to win but helped each other and kept things entertaining and provided excitement, leadership, memories and were leaders in the on going changing way that Stock Car Racing has developed.

On Friday night, September 20th the program will feature 2 rounds of heat race qualifying action for The Malvern Bank Cash Money Late Models and an exciting one on one elimination to decided the front row, A full show of Heats and Features for The USRA B Modifieds racing for points along with $400 to win and $50 to start, The Midwest A and B Classes both running full points programs and extra money.

Saturday Night, Under The Lights presented by Midwest Sheet Metal of Springfield are 2 Last Chance features for the large car count expected and The 100 Lap Late Model Feature, IMCA Modifieds competing in a full event with a $500 to win feature and $100 to start, USRA B Mods competing for points and $400 to win and 50 to start, Midwest A and B Classes, Pure Stocks running track area rules and Mini Lates. 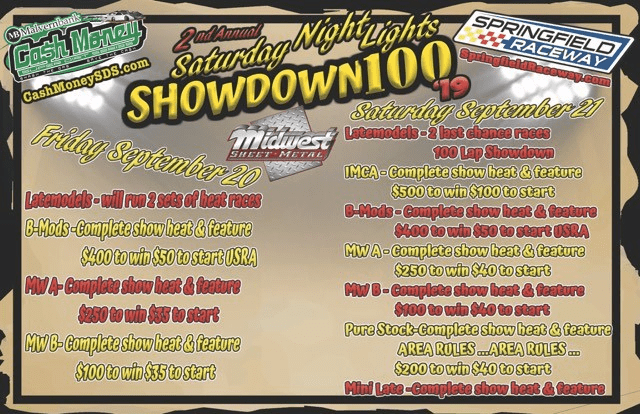 WE'RE HALFWAY THERE: Outlaws Hit Midpoint of 2020 Campaign 22 Races Down, 22 Race Nights Left on the Calendar 2020 has been "different" to say the...
Read more

WE'RE HALFWAY THERE: Outlaws Hit Midpoint of 2020 Campaign 22 Races Down, 22 Race Nights Left on the Calendar 2020 has been "different" to say the...
Read more