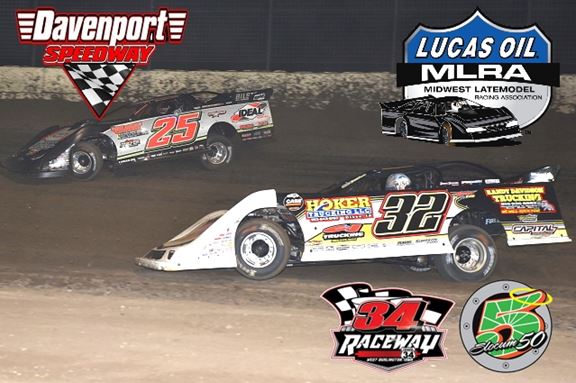 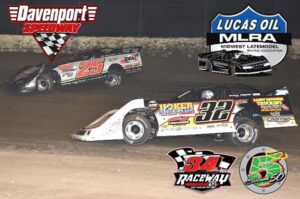 Wheatland, Missouri (April 12, 2022) – Coming off a strong start to the 2022 Lucas Oil MLRA season which saw car counts of 39 & 36 respectively, the stars of the series are set to get back on track this weekend with a key early season swing on the eastern edges of the Hawkeye state.

The trifecta weekend of racing will get under way on Thursday night April 14th, with a $5,000 to win stop at the Davenport Speedway. Located on the grounds of the historic Mississippi Valley Fairgrounds, this will be the series one and only visit of the season to the ¼ mile venue, and the first time the MLRA has teamed up with K Promotions and Ricky Kay for the event. Thursday will also mark the series ninth all time visit to Davenport, where one year ago Billy Moyer topped a 40 car field in the first stop of the season, while Ricky Thornton Jr. made his way to victory lane just one month later.

After leaving Davenport behind, action will move south to the 34 Raceway in West Burlington, IA for two big nights of racing on Friday, April 15th and Saturday, April 16th.

In 2021, the Annual Slocum 50 expanded from a traditional one day show into a two day marquee event on the MLRA schedule. The event which started in 2009, honors late model racer Brent Slocum, whose life was tragically cut short in 2005 at the 34 Raceway. Now entering its 14th consecutive season, the event continues to grow in popularity among both fans and drivers alike. In 2021 a total of 41 drivers took part in the event at the 3/8 mile, semi banked clay oval.

Friday night’s racing action which has been dubbed the “Slocum 50 Prelude”, will get the weekend started as drivers compete in a $5,000 to win main event. Brian Shirley grabbed the win in last year’s inaugural Prelude, over four time Slocum 50 winner Bobby Pierce. Pierce is the only repeat winner in the storied history of the main event, scoring back-to-back wins in 2019 & 2020 to give him a total of four Slocum 50 victories.

Saturday night the 14th Annual “Slocum 50” will take center stage, when $10,555 goes up for grabs in the 50 lap main event. This year’s edition will also mark the 5th consecutive season that the event has been sanctioned by the Lucas Oil MLRA. While Pierce has traditionally been the driver to beat, one year ago it was Californian Jason Papich grabbing the spotlight in what proved to be a popular victory. All drivers that qualify for Saturdays feature event will pocket a minimum $750.

Other notable drivers to have notched wins in more recent years include, Shannon Babb 18’, Chris Simpson 17’, and Ryan Unzicker 15′.

For more information on the Brent Slocum Foundation and how you can join in giving back in honor of Slocum, fans are encouraged to visit their website at www.SlocumRace.com.