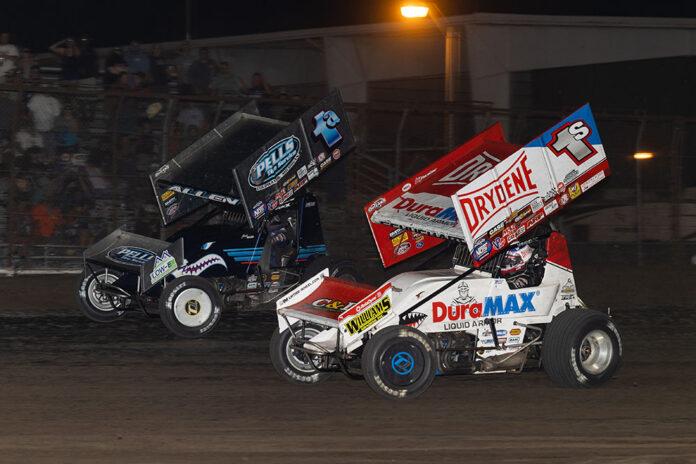 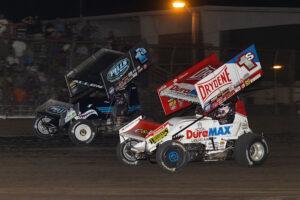 To make things more dramatic, Allen beat his uncle, his teammate, and his best friend Logan Schuchart, by a mere 0.050-seconds as the checkered flag waved at Chico, CA’s Silver Dollar Speedway.

The Pells Tire Service, Low-E Insulation #1A officially controlled all 40 laps at the 68th running of the prestigious event, but that is a deceiving box score. Allen, amid his ninth year on tour at 28 years old, fought off challenges from champion Brad Sweet at first, then winning machine Carson Macedo, and ultimately his running mate in the DuraMAX Oil, Drydene Performance Products #1S.

It came down to the 40th and final lap as Schuchart closed on Allen and showed him his nose coming to the white flag. With traffic blocking his path into the final corner, Allen found himself in no man’s land through the middle and quickly losing grip as Schuchart stuck to the bottom. As the #1S rocketed off the corner, the #1A found grip up high and the drag race to the line began.

They never touched, but Allen hit the wall and pulled a wheelstand as he crossed the finish line ahead of Schuchart by a jaw-dropping 0.050-seconds to score a win that left him speechless.

“I don’t know what to say,” Allen noted trying to compose himself. “As a team, Logan and I always dream about running 1-2. Having a finish like that is just so damn awesome. I didn’t know who won at first, I was just waiting for Mike [Hess] to say #1A or #1S. I can’t believe it. I just won the Gold Cup and it was a Shark Racing 1-2 and that’s back-to-back Gold Cups for our team. Wow.”

He took every restart and every lap traffic bout in stride, never wavering as he ventured away from his stereotypical low-line and throttled around the outside of the 1/4-mile. The victory brings Allen to five-career World of Outlaws NOS Energy Drink Sprint Car Series wins with four of those coming in 2022.

“You guys doubt me a little bit, but we’re figuring out how to set up these cars and I’m getting better as a driver,” Allen added. “It’s okay if people don’t want to believe in me, but as a team, we believe in each other and that’s what makes this happens.”

Perhaps the happiest second-place finisher in World of Outlaws history, Logan Schuchart couldn’t stop smiling on frontstretch following the spectacular finish with his nephew and teammate – even though his pursuit of back-to-back Gold Cup titles was stopped by the slimmest of margins.

“I honestly didn’t know who won it,” Schuchart said. “I’m so pumped, though. This is about the coolest outcome we could ever ask for. It’s awesome for two PA boys to be racing for the win at Gold Cup, the most prestigious race on the West Coast. I’m so proud of Jacob, his team, my team, and everyone involved in Shark Racing. You can’t ask for much more than this.”

Following the pair of Shark Racing entries to the stripe was Carson Macedo with a third-place effort in the Jason Johnson Racing, Albaugh #41. It’s his 23rd World of Outlaws podium finish of the season as the Lemoore, CA native looks to cut into his 96-point championship deficit with only 12 races remaining in the 2022 campaign.

“This place was really racey tonight,” Macedo said. “My guys gave me a car to win, but I just felt like every time we would get to the tail of the field a caution would come out. I needed more traffic to get up there with those guys. It was pretty cool to watch that photo finish right behind them at the line, though.”

Closing out the top-five in Saturday’s finale was Sheldon Haudenschild in fourth aboard the Stenhouse Jr. / Marshall Racing, NOS Energy Drink #17, and Brad Sweet, who momentarily led on Lap 23, finishing fifth in the Kasey Kahne Racing, NAPA Auto Parts #49.

David Gravel took sixth aboard the Big Game Motorsports, Huset’s Speedway #2, and Spencer Bayston came home seventh in his CJB Motorsports, TrueTimber #5 to give the World of Outlaws a top-seven sweep over the California locals.

Rounding out the top-10 in the 68th Gold Cup was 16-year-old Ryan Timms with his third top-10 in four Series starts, Donny Schatz with a KSE Hard Charger performance from 21st to ninth, and Fremont, CA’s Shane Golobic driving the Kevin Kozlowski-owned #57 as the highest finishing local competitor.

UP NEXT (Fri) – The World of Outlaws NOS Energy Drink Sprint Car Series will host its ninth and final race of the year in California this Friday, September 16 at Keller Auto Speedway in Hanford, CA with a $21,000 prize available in the Tom Tarlton Classic.