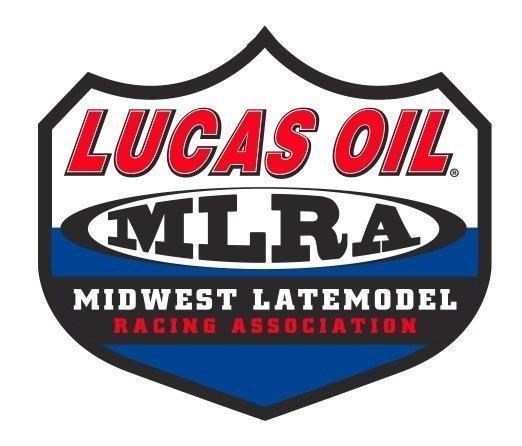 Wheatland, Missouri (November 22, 2022) – With the 2022 season in the record books, all attention turns to what will become the 35th consecutive season of action for the Lucas Oil Midwest Late Model Racing Association (MLRA), as the series today unveiled their 2023 slate of events.

The upcoming campaign will take drivers to eleven different venues across five Midwestern states, as they compete in a total of 24 championship events. The first thirty days will be huge for drivers vying for the series Championship with a total of nine events scheduled, presenting an opportunity to win just shy of $60,000 in first place money.

The season opener returns to the Lucas Oil Speedway in Wheatland, Missouri on March 31st and April 1st for the “Spring Nationals”. The last time the MLRA kicked off a season at the “Diamond of Dirt Tracks” was in 2017, and this time the stakes will be even higher as Friday night’s winner will pocket $5,000 while Saturday night will feature a $10,000 to win finale.

The following weekend will present a new early season addition to the schedule, as the Tri-City Speedway in Granite City, IL welcomes what is expected to be a huge car count. The “Winter Meltdown” will feature complete shows on Friday and Saturday April 7th & 8th paying $5k and $7k respectively.

Just five nights later action will move north to the Hawkeye State for three big nights of action. A special Thursday night stop at the ¼ mile Davenport Speedway on April 13th will get the weekend going, followed by a two night stand at the 34 Raceway in West Burlington, IA. Friday’s Prelude to the Slocum will pay $5,000 to win before the 15th Annual $10,555 to win “Slocum 50” takes center stage on Saturday night.

After a weekend off, the month of April will wrap up on the 28th and 29th with the annual running of the “Battle at the Beach” on the 1/3 mile Lake Ozark Speedway just outside of Eldon, MO. The weekend will again feature two complete shows paying $5,000 and $7,000 to win respectively.

Just one weekend of action is planned for the month of May, but with that will come the biggest Crown Jewel of the season for the MLRA as they return to the Lucas Oil Speedway for the 31st Annual “Show-Me 100”. As in recent years, Thursday and Friday will be complete qualifying shows co-sanctioned with the Lucas Oil Late Model Dirt Series as drivers accumulate points in attempt to lock into Saturday night’s finale.

The 10th Annual “Cowboy Classic”, honoring longtime MLRA Owner/Promoter Allen “Cowboy” Chancellor will get the weekend underway on Thursday May, 26th followed by Friday nights “Tribute to Don & Billie Gibson”. Both qualifying events will pay $6,000 to win. The Memorial Day Weekend Classic will conclude on Saturday night with the $50,000 to win “Show-Me-100”.

The weekend leading up to July 4th will take drivers on another three day swing, this time stretching across three states. On Friday night June 30th the MLRA returns to the CJ Speedway in Columbus Junction, Iowa. Saturday July 1st will find drivers chasing a $7,000 pay day at the prestine I-70 Speedway in Odessa, MO, before heading back east to the Adams County Speedway (formerly Quincy Raceways) on Sunday night for another $7,000 main event. This will be the MLRA’s first trip to the 1/4 mile Speedway in Quincy, IL since 2019.

Another short turn-around awaits, as drivers will slide north for the second Crown Jewel co-sanctioned(LOLMDS) weekend of the year on July 6th – 8th for the NAPA Auto Parts “Gopher 50” at the Deer Creek Speedway in Spring Valley, MN. Similar in format to the Show-Me 100, the event will pay $5,000 to win each of the first two qualifying nights before drivers chase a $50,000 top prize on Saturday.

The only single day stand on the 2023 schedule will take place on July 15th as teams again tackle the Lucas Oil Speedway in pursuit of the 17th Annual “Diamond Nationals”.

The Annual Labor Day Weekend Classic at the Lucas Oil Speedway, the “Ron Jenkins Memorial” expands in 2023 to a two day show. The weekend will get started on Friday September 1st with a $5,000 feature followed by a $7,000 Saturday night showdown. The weekend will conclude on Sunday, September 3rd when the newly renamed Moberly Motorsport Park host the MLRA for the 3rd Annual “Wiener Nationals”.

The racing season will conclude on October 13th & 14th at the Tri-City Speedway. Over the course of the past three season, the MLRA Championship Weekend at Tri-City has showcased some of the best parity in racing, with five feature events and five different winners to date.

For all of the latest news and information, including the full 2023 schedule, fans are encouraged to visit the series website at www.MLRARacing.com.

**2023 MLRA WINNERS CIRCLE PROGRAM**
The MLRA will continue it’s “Winners Circle Program” in 2023 awarding $200 in Appearance money to the top (10) in points at each venue with perfect attendance, in addition to purse money earned. For full program details contact Series Director Ernie Leftwich. 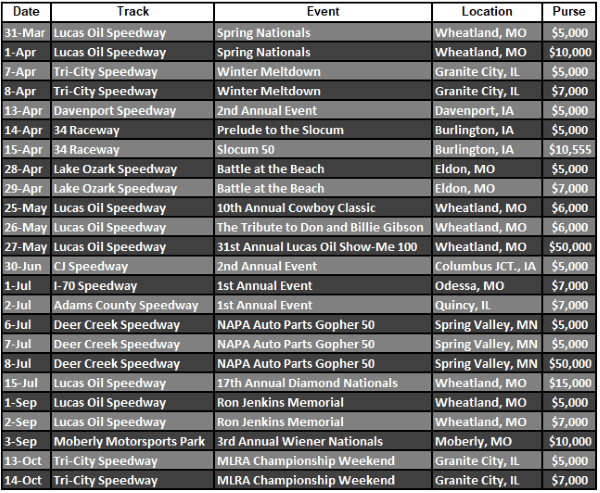