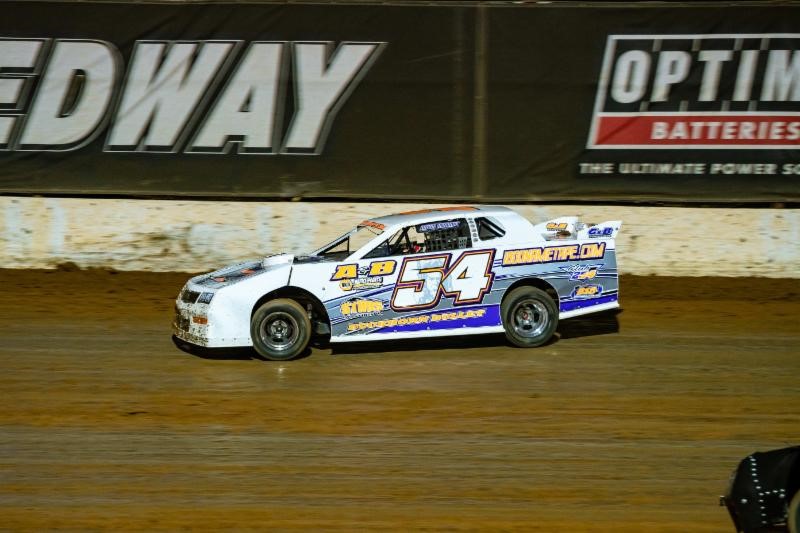 By Lyndal Scranton - WHEATLAND, Missouri (November 7, 2018) - Most drivers never get to experience a stretch like David Hendrix enjoyed in the first half of the 2018 Lucas Oil Speedway season, when he reeled off six straight feature wins in the Big O Tires Street Stock division.

That streak was an obvious key in Hendrix, of Waynesville, eventually winning the season championship by 15 points over Brian Schutt. Winning every week - at least for a while - didn't come without some negatives, though.

"It's kind of a double-edged sword," Hendrix said. "You go with high hopes of winning, but there's a lot of pressure there. The first night that you don't run good after winning that many races - like when we got spun out and came from the back to finish third - everybody is like, 'you didn't win, what's wrong?' It puts some pressure on you."

Many will point to the blazing-hot stretch as the key to Hendrix's championship. But it also can be argued that the title was actually won last winter, when Hendrix toiled long hours in his shop to whip a previously ill-behaving race car into shape.

Late in the 2017 season, Hendrix took over the car that his friend Jay Prevete owned and hadn't had any success with. Hendrix didn't either. For a while after the season, anyone could have purchased the car, ready to race, for $12,500.

"Jay built the car for himself and raced it a few times (in 2017) and he just hated it," Hendrix said. "There was just a lot of stuff that wasn't right. He brought it to me and I drove it a little bit and could tell it wasn't right. I never could get it to handle very good.

"There were a lot of issues we had to address over the winter. Just a lot of little details."

Hendrix, who's been one of the region's top Street Stock drivers for more than a decade, said he's kept detailed notes of his races going back to 2005 including track conditions, weather, tires, springs, shocks and general post-race thoughts. He turned to his personal library to help in how to address the car's issues.

Hendrix's feature win on July 5 capped the six-race streak. It was his last win of the Lucas Oil Speedway season as Schutt kept the pressure on. The title race went all the way down to the final night, when Hendrix finished third to Schutt's fifth to nail down his first championship since 2014 when he won 11 features at Lucas Oil Speedway.

This one, while not as dominant from start to finish, might have been more satisfying because it came with a car that gave him so many fits a year ago.

"When you work all winter like we did, when you know you've taken a car that really wasn't doing that well and you've put your heart and soul into it ... when everything comes together, it really feels good," he said.

Ed Schutt, Brian's dad, assembled the motor and it ran without a flaw all season. Prevete had purchased the motor's parts from Bodee's Racers Auction in mid-Missouri last winter.

"I'd put Ed up against anybody in the country as far as engine builders go," Hendrix said. "As a driver, I have a different level of confidence behind the wheel when he's done our motor. That's one element I don't have to worry about."

Hendrix said next year's racing plans are not finalized, but he and Prevete are leaning toward making a run at a Lucas Oil Speedway points repeat. He enjoys the 13-week points schedule that serves up an off week for Street Stocks every few weeks.

"Nothing is set in stone yet," Hendrix said. "But with Lucas' schedule, one thing I like about it is it's not super grueling that makes you dedicate (to race) every week. It gives you some time to do things with your family and take a break."

Hendrix, who runs his own construction business, gets race-night help in the pits from his dad, Eugene, girlfriend Ashley and 11-year-old son Jacob who continues to take more and more interest in the sport.

"It was a really good season and we're thankful to our fans and our sponsors," Hendrix said. "We couldn't do it without them."