The dirt track in West Memphis, Ark., is the site of the 12th annual USCS Flip Flop 50 and USCS Fall Nationals. It's an event Hagar has won in the past and the track has been a successful one for him. 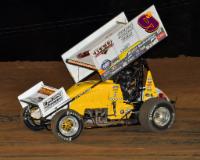 "We've had good success at this race and success at this track this year also," he said. "It's one of the races we always look forward to, especially with trying to finish the year strong and head into the offseason with some momentum.

"I think we've won the Flip Flop 50 three or four times. It's always been the first feature that we've won. We've had some good runs from the back of the second feature to the front. I think third is our best result in that second feature."

Hagar has a trio of victories at Riverside International Speedway this season. In fact, Hagar has finished in the top two in five of his six starts at the oval this year.

"The track at Riverside has played into our favor just about every time," he said. "I think that's helped us succeed. Every time we've been there we've had a track we can race on and that's not locked down. We've always found our way to the front."

While this season has been stymied by the pandemic, Hagar has made the most of his opportunities. He has eight victories, 14 top fives and 18 top 10s in 21 races. If he can capture one triumph this season Hagar will reach the nine-win mark for the seventh time in the last eight years.

"It'd be big for the team," he said. "We didn't get to start the season out like we normally do, not having a motor and then with COVID-19. When we did get to run we came out strong and had success. We're trying to carry that momentum and maybe pick up a win or two this weekend."

Friday and Saturday at Riverside International Speedway in West Memphis, Ark., for the 12th annual USCS Flip Flop 50 and USCS Fall Nationals with the USCS Series

Dynotech Performance is an engine building and performance shop based in Memphis, Tenn., and operated by Ricky Stenhouse Sr.

"Ricky has been doing our engines since the beginning," Hagar said. "We've had great success. Every time we get something from him it's reliable. It makes it easy on the pocket book knowing you have something that will last."